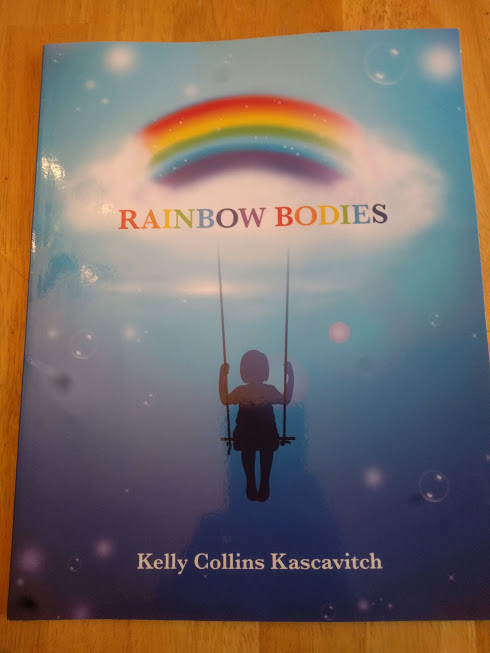 As usual, the opinions expressed are my own, and I bought this book myself.

So, I’ve been on the hunt for things for us to do as a family on the weekends.  Weekends around here are challenging – the adults want down time, the kids struggle with unstructured time, and we don’t always share the same ideas about how to have a good time.

To that end, I’ve been reading books on doing yoga with special needs children, got certified to teach kids yoga via Pretzel Kids, researching games that are cooperative and less turn-based and less counting based, bringing snow into the kitchen as a sensory bin, trying to figure out how to store all the puzzles the kids have gotten over the years and….trying not to pull my hair out.

One of the games we picked up recently is called Rock On. It’s a geology-based game, but parents could quite easily add on metaphysical properties, and it’s a great teaching tool for stone and crystal identification.

There are different levels of play for kids who are more or less skilled in geography – we’re still working on the easiest “matching” level, which doesn’t require any questions. There are full color charts for both the main unpolished stones and the tumbled stones that are used as markers.

All in all, a fun time all around, and a great collection of crystals to get started learning about them. 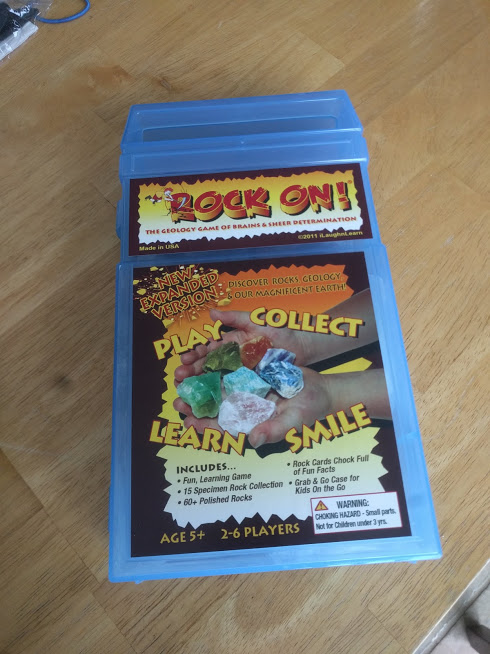 As is almost always the case, I bought this product myself, and the review represents my opinion.

This is a deck of 57 cards, each with a different crystal or stone, several metaphysical properties of that stone, and an affirmation. There’s also a book, as is typical for most oracle decks, giving a bit more explanation of each affirmation. 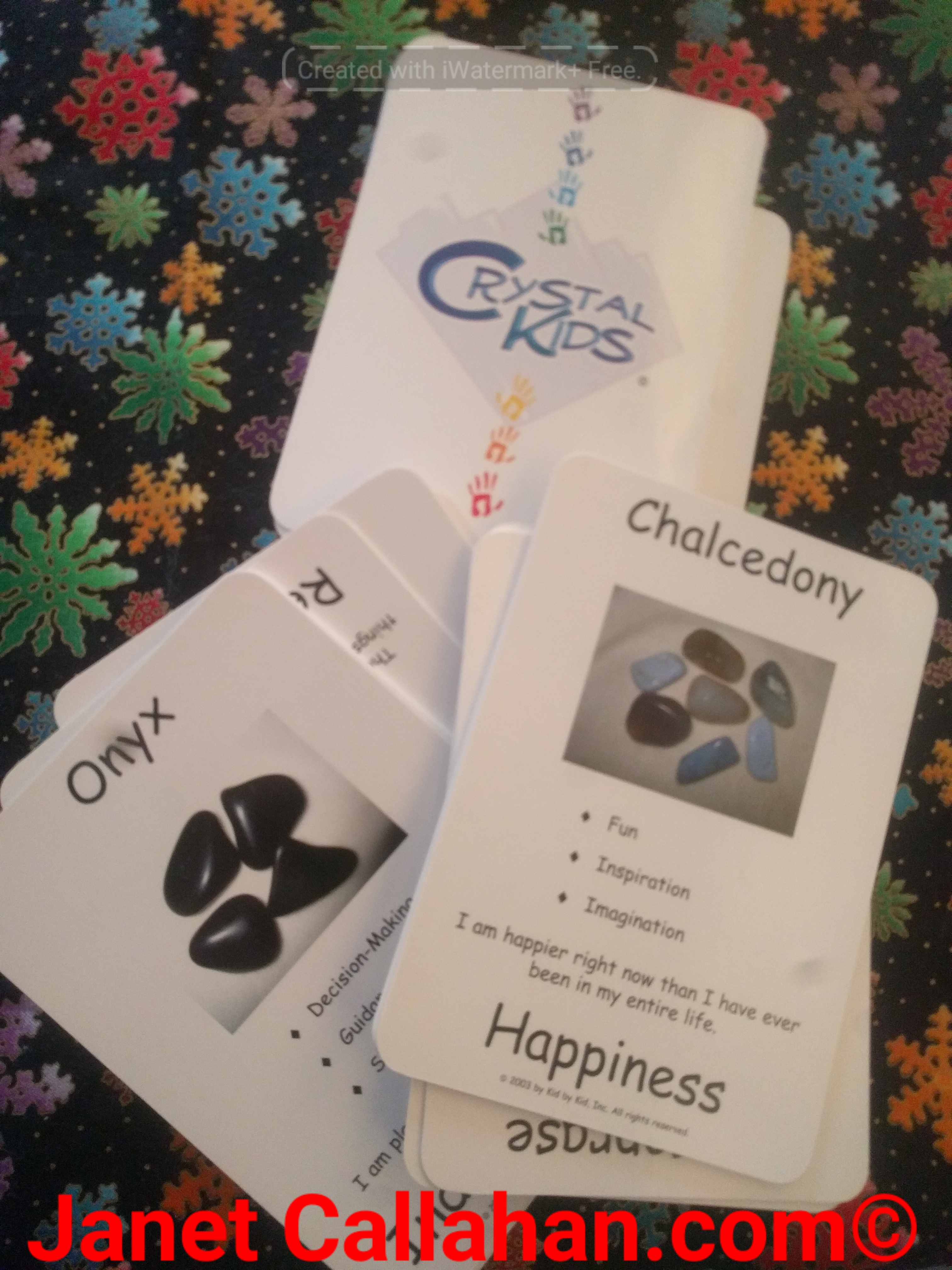 The cards are ok, though if I’m being really picky, the photos are sort of varied in lighting, which makes some of the stones harder to see. It’s clear the layout was done on a word processor, and the cards don’t really have the polish you’d expect from a professionally designed deck, but they do the job.

The book with the deck says that you can buy a kit with each of the stones in the deck. I haven’t found that anywhere, but I have found the “Crystal Kids” books that go with the deck at a store near here.

There are several suggested uses for the cards. Using them as flash cards to learn the properties or to match with the actual stones is one. Another is as an oracle deck, pulling a card each morning, both for the affirmation and to choose to carry or wear the stone that matches the card of the day.

I think, if you had all the stones, that could be a neat way for anyone (kids or adults) to learn about stones.

All in all, a nice deck, and probably a good starting point for many who want to learn about crystals.

Healing with Crystals for Kids: 25 Awesome Crystals, by Stephanie Tingle

So, I’ve been on an energy and holistic healing kick lately, and since I’m running low on Pagan themed books for kids, I figured I’d branch out a bit and look for “technique” related books for kids. Turns out there’s a ton of them.

This one is written by one of the consultants for a really nice online crystal shop, http://www.healingcrystals.com – they also post tons of great cryastal info on their facebook page.

This is a nice introductory book – it talks about the science of crystals, the history of their use, chakras, and how to care for crystals. The bulk of the book is profiles of 25 different (and mostly fairly common/easy to find) crystals, plus a page for your child to write their own notes, thoughts, and opinions about each.

My one complaint about this book is the photos – they are all fairly washed out (don’t get me wrong – color control in most small publishing outfits these days is challenging), but this is to the point that they can’t be used to identify stones, which would seem to be an important part of this book.

Other than that, it’s a great starting point for kids to explore stones on their own.

So, back in August, I was at Pagan Pride Detroit, and I ran into Rowan Moss and T.S. Lamb, the author and illustrator (respectively) of the Pagan Children Learning Series.

We had a nice long chat about the state of publishing, and what things were what, and kids, and Pagan things for kids…and Rowan offered me a bottle of their Nightmare & Monster Spray to try out.  She developed it for her son, who had been having terrible dreams. She’d gotten him a dream catcher, but he was convinced that it wouldn’t work without being cleaned, so this became part of their cleaning ritual. 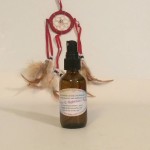 Now, my kiddos sleep pretty well these days – so I wasn’t sure what I was going to do to try this out to review it. But, never fear, fate had other ideas.

After a round of particularly odd and unsettling dreams, I sprayed all around our bedroom, and the bed. My husband saw me and asked what I was doing. I explained the concept, and he sort of pooh-poohed it, but then said that all the dreams he remembered were things most people would consider nightmares (true statement – if you’ve ever heard about any of his dreams you know his are just creepy). I laughed and said, “well, if it’s any different tomorrow, you’ll have to let me know!”

Fast forward 12 hours. He looks at me and says, “so…um…I didn’t have any strange dreams last night…I guess it works.”

Well then.  There you go.

I know Rowan and T.S. were going to be working on a shopping cart, but I haven’t seen it yet. Meanwhile, I suspect if you stop by their facebook page and ask, Rowan can get you a bottle of this stuff.