It’s been an odd few months, even for us. A lack of sleep is generally causing a lack of motivation on all fronts, and fixing the sleep issues has been more challenging than one might hope.

In the midst of this all, I’ve been feeling rather lost, spiritually speaking. No time for full rituals, and meditation is right out – I fall asleep – and many of the other things that I used to do are just darn hard with things here the way they are.

But….as always, where there’s a will, there’s a way. Big Dark & Scary has been waiting patiently, and finally poked me the other day. Because, you know, when your primary matron deity is good at breaking down barriers and making changes happen, and you ignore that idea for too long, She gets cranky. Through an odd series of events, I came across a page of mantras for Her, and it occurred to me that I could do that. Daily even.

And from there, down the rabbit hole I went, reading different mantras and looking at prayer beads and knowing exactly what I wanted….and then realizing that with the schedule this week, there was just no way to make it happen, even if I could find appropriate supplies locally.

I was going to put it off, but instead I went to a local craft store and went and played in the bead aisle, looking for what felt right. In the end, I settled on something a little less flashy than the original plan (something that still stands out, but won’t be considered a problem at work).  Dyed red quartzite, red lava rocks, black glass beads, and some smaller glass crystals make up the mala bracelet I’m now wearing, and I’ve already used it several times to run through a set of mantras. 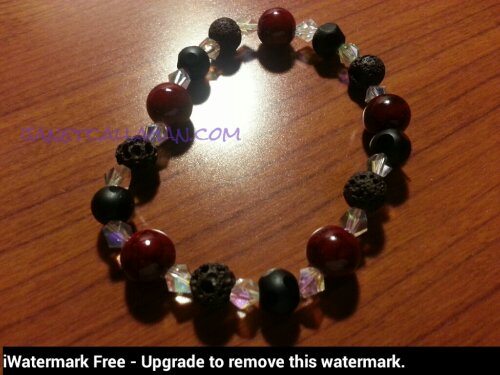 So here’s hoping that this small step will lead to some other changes in the right direction.

Do your children (or you!) wake up in the wee...
$25.00
2 students enrolled
1 lesson
Janet Callahan
LP Courses